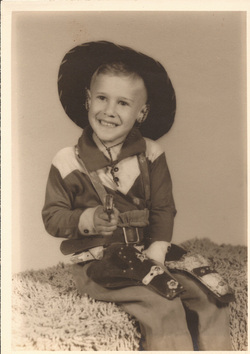 For the past fifteen years my work has focused on mixed media sculpture.  Since 2012 I have focused on Stoneware ceramic bowls as paintings. My work has been exhibited nationally and is included in many private and corporate collections.

My parents were divorced when I was quite young and my older sister and I lived with my Mother and my Grandparents. My Grandfather was a barber who never seemed able to adapt to changing hairstyles. He insisted on cutting men’s hair in the 1960's the same way he did in the 1940's. Consequently his clientele was dying out and he never made much money.  He was a devout Union man and active Democrat who vehemently railed against inequalities for the workingman.  He was cantankerous and hard to live with. His shop was attached to our house so he was always home. My Grandmother worked at home as a seamstress to make extra money.  She was warm and loving, baked bread once a week, canned vegetables, and always drank one beer before going to bed.  Here I was exposed to the fruits and frustrations of people who worked with their hands.

My Mother worked as a Presbyterian church secretary for over twenty years. Though she often struggled with self-doubt, her faith and her belief in her children seemed to enable her to move ahead.  I now find it amazing that she was able to be the main provider for a family of five on a secretary’s salary, and still send two children to college.  She was a beautiful woman who always looked twenty years younger than her true age.  Though she dated and loved dancing, she never remarried until she was in her seventies. My sister is four years older than I.  She is outgoing, smart, popular, feisty, and was the homecoming queen.   Strong women, the motivation of faith, the ability to work with what was available, and not to waste anything, have been recurring influences in my life and work.

In college I learned that materials have a life of their own.  I became familiar with pottery vessels and the importance of what is inside and not seen.  The object is you, and it is that idea. Concept gives meaning.  We all must believe that things will get better; that we will find what we are looking for, that our dreams have importance, that all things will converge on the horizon.  It is this faith that I try to address as I work.